This Saturday on October 9th, 2021 the University of Alabama’s football team will play its sixth game of the season against Texas A&M. The game will take place at Texas A&M at 7 p.m. central time. This is Alabama football’s third SEC game of the season. It will be broadcasted on CBS.

This link describes how the decisions were made for the upcoming game. It describes which station was picked and why the time of the game was selected at 7 p.m.

The University of Alabama football team is the number 1 ranked team in the country, while Texas A&M’s team is ranked 15. Alabama has not traveled to Texas A&M in two years. Last year the final score of the game was 52-24, but this year the game is expected to be much closer. This will be the 14th time that these schools meet. 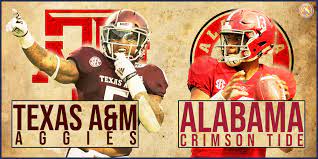 The game will take place at Kyle Field in College Station, Texas on Saturday. Alabama as of right now is favored by 17.5 points. Alabama’s history against Texas A&M proves consistency. They have won eleven of the thirteen games. Key players to pay attention to this game are both teams quarterbacks, running backs, and wide receivers. Bryce Young, Alabama starting quarterback, has passed for 1365 yards and has only thrown two interceptions this whole season. Zach Calzada is the starting quarterback for the Aggies. His passing yards for the year is 744 and he has thrown four interceptions. Bryce Young has proven to be a much more consistent quarterback, but the match up should be interesting between two SEC quarterbacks. Brian K Robinson Jr, Alabama running back, and Issaiah Spiller, Texas A&M running back, have both rushed many yards this year. Robinson has rushed 379 yards and has 6 touchdowns. Spiller has rushed 445 yards and scored 2 touchdowns. The run game might be a key element for the Aggies offensive this week since they can rely on Spiller based on statistics. Jameson Williams is a wide receiver for the Roll Tide and has caught 3 touchdowns and has 364 receiving yards. Ainias Smith is another wide receiver but he plays for the Aggies. He has 2 touchdowns and has 200 receiving yards. Based off the recent stats from this year, it seems like Alabama will be throwing the ball more because their quarterback and receivers have been the best statistically this year.  Texas A&M will most likely run the ball, especially because of how strong Alabama defensive has proven themselves to be this season by averaging 3.67 interceptions per day. Texas A&M has a running back that has preformed this year and that they will use against one of the best defensive teams in the country.